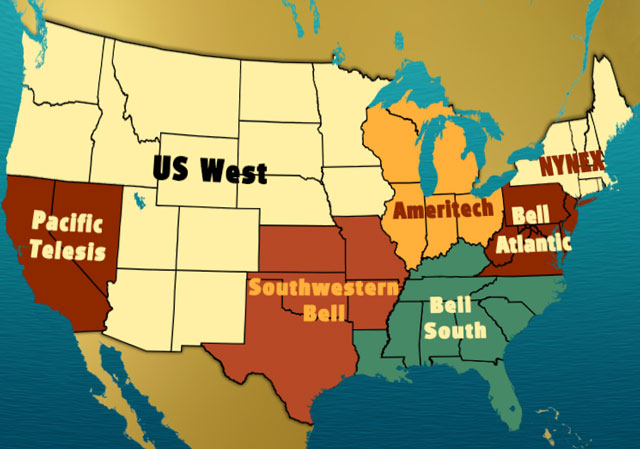 On January 1, 1984 the United States Department of Justice broke up AT&T (Ma Bell) with an anti-trust lawsuit. Consequently, they mandated a  divestiture of AT&T into itself and seven new regional operating companies. People generally refer to these 7  as the Baby Bell companies.  As a result, Shareholders of AT&T on December 31, 1983 received 1 share of each of these companies for every 10 whole shares of the original AT&T that they owned. In addition they received 10 shares of the revised AT&T for every 10 whole shares of the old AT&T they owned. Therefore, if you originally had 10 shares of AT&T before divestiture, you would end up with 10 shares of the downsized AT&T and 1 share in each of  Ameritech, Bell Atlantic, Bell South, Nynex, Pacific Telesis, Southwestern Bell, and US West.
Furthermore, your cost (or basis) in each of the new companies was deemed to be a percentage of what your individual investment in the original AT&T was.

Those who track Baby Bell Companies find it particularly difficult because the companies have gone through multiple changes, acquisitions, spin-offs, and name changes. Furthermore, many companies bought back other Baby Bells and recombined. When we tried organizing the data on the Baby Bells in the traditional manner, we came to the conclusion that the best way to present this data is in the form of what we call “Cost Basis Ref-Sheets”

When you view a “Ref-Sheet” for a given company you will see corporate actions, and lists of every dividend paid by date as well as the corresponding price per share on the date of the dividend. Therefore, understanding this information is essential since most Baby Bell stock held was held in a manor as to reinvest dividends. Because we liked the Ref-sheet idea so much, we decided to have a ref-sheet for all companies on our website,  not just the Baby Bells. New From Our Team

At donationcalculator.com we provide an interactive spreadsheet to find, calculate, and document the value of clothing, household goods, furniture, appliances and other non-cash items donated to charitable organizations. We obtained Donation values from the websites of Salvation Army, Goodwill, and other various charities. We created a new site dedicated to  visual cost basis charts. We charted companies that you may be interested in.  Some of the merger and spin-off corporate actions are very complicated and hard to follow by word. Hence, placing them in a chart format makes them more understandable. At cost-basis-charts.com we provide cost basis charts for many companies including AT&T Corp,  AT&T Inc, Air Touch, Altria/Philip Morris, Bristol-Meyers, Exelon, First Chicago, Lucent, NCR, Pfizer, Procter and Gamble, Sears, US West, and Verizon.